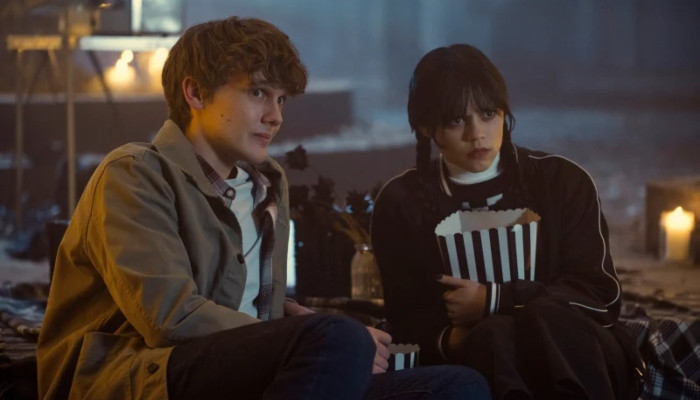 Hunter, who plays fan-favorite “normie” barista Tyler Galpin in the acclaimed series reflected on his work experience with Ortega, calling it “super easy.”

In an interview with Hollywire, the Truth to be Told star said, “I mean, off-camera it’s super easy, because Jenna’s so lovely.”

Hunter revealed that he and Ortega became close before moving to Europe to film the Tim Burton show. “I mean, we met for coffee in Burbank before we ever went to Romania. And, yeah, I just love her.”

Gushing over his co-star, who plays Wednesday Addams on the show, he said, “She’s so easy to work with, she’s so talented. I learned so much from her.”

Hunter explained, “we were trying to build a love story with Wednesday Addams, and I would sometimes be like, ‘Okay, are we building this enough?’ And Jenna would be like, ‘I can do that with a look.’ And then, I was watching the show, and I was like, “Damn, yeah, she can!’”

Wednesday has officially been renewed for season two. “We can’t wait to dive headfirst into another season and explore the kooky, spooky world of Nevermore,” co-showrunners Miles Millar and Alfred Gough said.

Wednesday season one is currently streaming on Netflix.