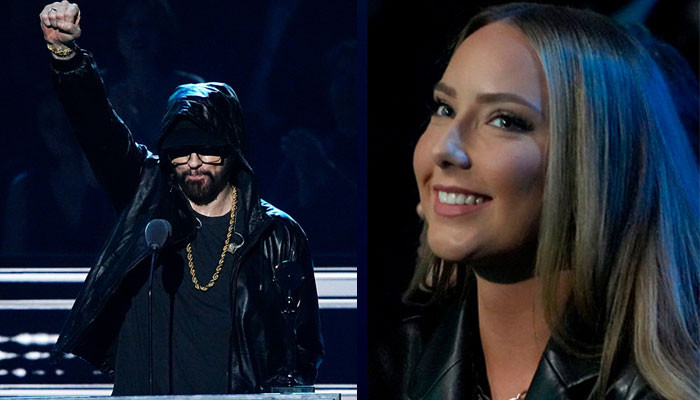 Eminem was was inducted into the coveted Rock n Roll Hall of Fame on Saturday, November 5th, 2022, and he had his daughter Hailie Jade along with him for mark a memorable night for him.

Hailie has been a big inspiration behind the rapper, 50, many hit song which includes, Hailie’s Song, Mockingbird and When I’m Gone.

At the event, Eminem delivered a heartfelt speech with some light-hearted moments. The rapper also detailed early struggles, especially his 2007 overdose. Just like his music, rapper, whose real name is Marshall Matters, addressed his daughter , teasing her to plug her ears.

In a video clip shared by ePro YouTube channel, Hailie’s reaction also seemed to be in good humour.

“Hailie, plug your ears: because drugs were f—ing delicious, and I thought we had a good thing going man, but I had to go and f— it all up and take too many. God d–n. OK Hailie.”

During the speech, Eminem also thanked a village of rappers for inspiring him. “I realise what an honour it is right now to be here up here tonight, and what a privilege it is to do the music that I love. Music basically saved my life … I’ll keep this as painless as possible,” he began. “I’m probably not supposed to actually be here tonight because of a couple of reasons. One, I know that I’m a rapper, and this is the Rock and Roll Hall of Fame. There’s only a few of us who have been inducted already.”