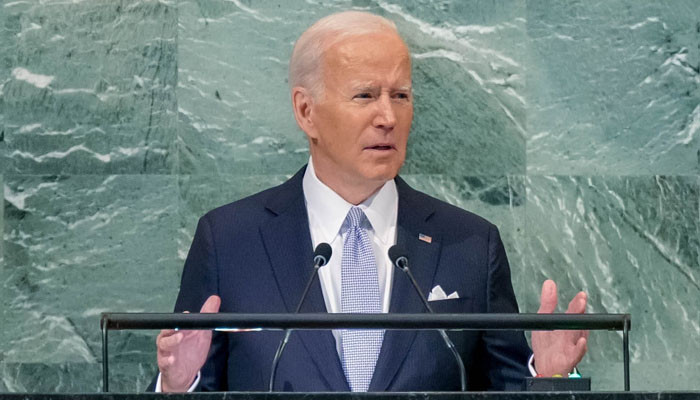 United States President Joe Biden on Thursday highlighted the devastation caused by the floods in Pakistan and asked the international community to help flood-hit Pakistan.

The recent unprecedented monsoon rains triggered floods across the country that have caused massive devastation. More than 1,500 people lost their lives, while thousands of houses and cattle were swept away.

Millions of people have become homeless and are living in the open sky. The country has yet to brace for another worst situation after a disease outbreak in flood-ravaged areas.

During the 77th session of the United Nations General Assembly (UNGA), US President Joe Biden has drawn the world’s attention to flood-hit Pakistan.

“Pakistan is still under water and needs help,” the US president said during his address at the UNGA session.

Prime Minister Shehbaz Sharif was also present in the iconic hall of the General Assembly during Joe Biden’s speech.

PM Shehbaz will address the UNGA session on September 23. He will focus on the challenges faced by Pakistan in the wake of the recent climate-induced catastrophic floods in the country.

In his address, US President Joe Biden announced another $2.9 billion for a fund aimed at helping to resolve global food insecurity.

The money “builds on the $6.9 billion in US government assistance to support global food security already committed this year,” said a statement from the White House.

Earlier, PM Shehbaz appreciated the US role in addressing the issue of climate change and thanked the country for extending help to Pakistan in the face of the devastating floods, the prime minister’s office said on Wednesday.

The PM held a meeting with the US Special Presidential Envoy for Climate, John Kerry, on the sidelines of the 77th Session of the United Nations General Assembly (UNGA) in New York.

Noting that “the devastating floods have made Pakistan ground zero for climate change”, the PM appreciated Kerry’s personal leadership in raising awareness and seeking solutions to the climate change crisis.