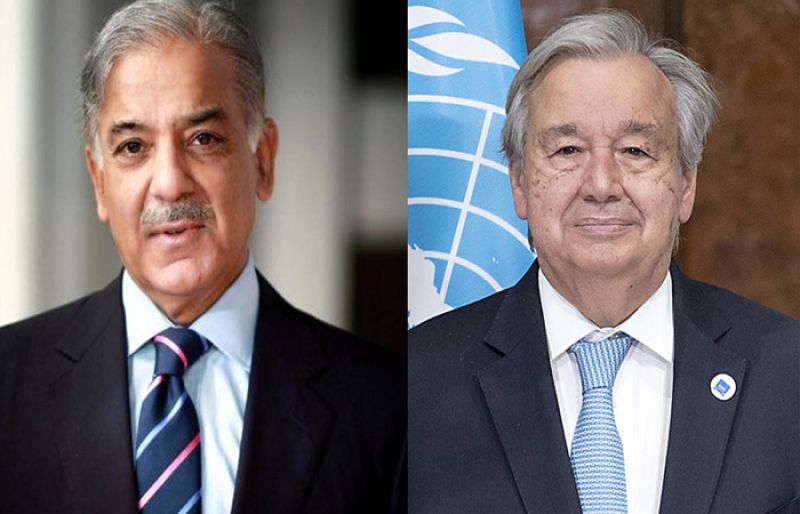 The UN secretary-general’s commitment came during his meeting with Prime Minister Shehbaz Sharif on the sidelines of the 77th session of the UN General Assembly in New York.

The UN chief said Pakistan deserves full and massive support from the international community to deal with the aftermath of the cataclysmic floods.

In response, the prime minister appreciated the secretary-general’s timely visit and affirmation of solidarity with Pakistan in the wake of the climate-induced catastrophic floods.

The UNSG visited Pakistan earlier this month to express solidarity with the flood-hit nation.

The prime minister is in New York, where he is scheduled to address the UNGA session to tell Pakistan’s story of “anguish and pain” to the world. PM Shehbaz has also met world leaders apart from the UNSG, where he appealed for help in light of the deadly floods.

Following his meeting with the UN chief, the prime minister attended a photo exhibition with the UN global communication head at the UN headquarters.

“These photos tell a tale of misery, pain, and anguish that 33 million people of Pakistan are experiencing for no fault of theirs,” the premier said describing the exhibition.

Hundreds of thousands of people displaced by the floods are living in the open and scores of people have died of diseases and floods since the beginning of the monsoon season.

Stagnant floodwaters, spread over hundreds of kilometres, may take two to six months to recede. Already they have led to widespread cases of skin and eye infections, diarrhoea, malaria, typhoid and dengue fever.

Authorities and aid workers have said more immediate help is needed for displaced families exposed to swarms of mosquitoes and other hazards, such as snake and dog bites.

Despite the efforts of the government and local and foreign relief organisations, many people are in dire need of food, shelter, medical assistance and medicines.

With Pakistan’s already weak health system and lack of support, displaced families have complained of being forced to drink and cook with unsafe water.

A historic and intense monsoon dumped about three times as much rain as Pakistan’s three-decade average. Combined with glacial melt, this caused unprecedented flooding.

The deluge, which scientists say was exacerbated by climate change, has affected nearly 33 million people in the South Asian nation of 220 million. It has swept away homes, crops, bridges, roads and livestock in damages estimated at $30 billion.