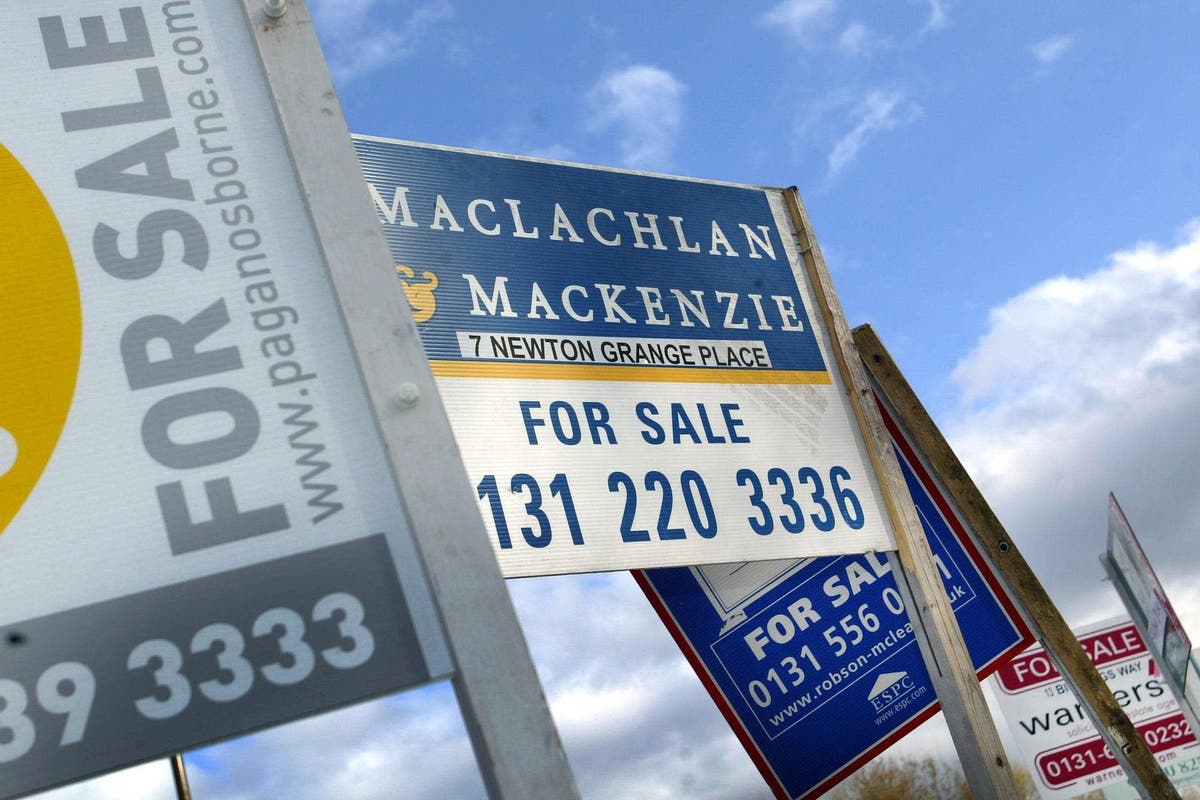 House prices recorded the biggest monthly fall in October since early 2021, according to new figures.

The average property value fell by 0.4%, marking the third month-on-month drop seen in the past four months, Halifax said.

The latest month-on-month decrease follows monthly falls of 0.1% in both July and September and a 0.3% increase in August.

Annual house price growth slowed to 8.3% in October, from 9.8% growth recorded in September.

Across the UK, the average house price in October was £292,598, which was the lowest figure since May this year, although typical prices remained near record highs, Halifax said.

Annual price growth among homemovers fell to 8.9% in October, from 10.3% in September.

The price growth slowdown for first-time buyers was more notable, Halifax said, slowing from 10.1% in September to 7.5% in October.

Given the greater challenges for first-time buyers in deposit-raising, plus tighter requirements for higher loan-to-value mortgages, the faster slowdown in prices is not surprising, Halifax said.

Kim Kinnaird, director of Halifax Mortgages, said: “The drop of 0.4% is the sharpest we have seen since February 2021, taking the typical property price to a five-month low of £292,598.

“Though the recent period of rapid house price inflation may now be at an end, it’s important to keep this in context, with average property prices rising more than £22,000 in the past 12 months, and by almost £60,000 (25.7%) over the last three years, which is significant.

“While a post-pandemic slowdown was expected, there’s no doubt the housing market received a significant shock as a result of the mini budget, which saw a sudden acceleration in mortgage rate increases.

“While it is likely that those rates have peaked for now – following the reversal of previously announced fiscal measures – it appears that recent events have encouraged those with existing mortgages to look at their options, and some would-be homebuyers to take a pause.

“The rising cost of living coupled with already stretched mortgage affordability is expected to continue to weigh on activity levels.

“With tax rises and spending cuts expected in the autumn statement, economic headwinds point to a much slower period for house prices.

“While certain longer-term, structural market factors which support higher house prices – like the shortage of available properties for sale – are likely to remain, how significantly prices might ultimately adjust will also be determined by the performance of the labour market.

“Currently, joblessness remains historically low, but with growing expectations of the UK entering a recession, unemployment is expected to rise.

“Whilst it may not spike to the same extent as seen in previous downturns, history tells us that how this picture develops in the coming months will be a key determinant of house price performance into next year and beyond.”

Last week, the Bank of England increased the base rate to 3%, from 2.25% previously.

This was the latest in a string of base rate increases, meaning that since December last year the average monthly tracker mortgage payment will have increased by £284.17 in total, according to figures from trade association UK Finance.

Andrew Simmonds, director at Bristol-based Parker’s Estate Agents, said: “Since the summer, I’ve been telling vendors that their house is worth what it was worth 12 months ago. I’ve lost instructions because they’ve said ‘nah’.”

He added: “Plenty have since come back to me saying: ‘You were right’.”

North London estate agent Jeremy Leaf said: “We are not seeing any collapse in pricing or sales agreed.”

Nathan Emerson, chief executive of estate agent body Propertymark, said more homes for sale are coming to the market “which is providing buyers with a greater choice”.

He added: “This will therefore mean they can be more level-headed with the offers they’re putting forward which will naturally see a softening in prices being achieved over the next few months.”

Jason Tebb, chief executive officer of property search website OnTheMarket.com, said: “Sellers are likely to find that if they don’t price realistically, they may struggle to generate interest.”

Alice Haine, a personal finance analyst at Bestinvest, said: “With inflation at a 40-year high of 10.1%, interest rates at 3%, the economy slowing and the mortgage market still reeling from the effects of Liz Truss’s short tenure as prime minister, affordability is very much in the spotlight, with buyers forced to confront whether now really is the right time to buy.”

Here are average house prices in October, according to Halifax, followed by the annual price increase: