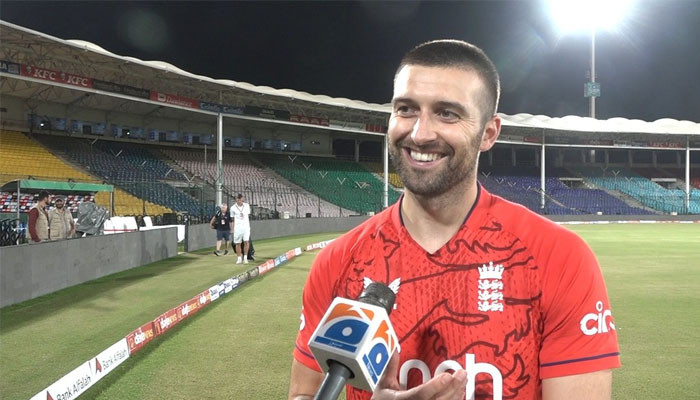 Karachi: After a hiatus of 17 years, English team is on Pakistan’s tour to play seven-match T20I series. However, England players not only enjoying cricket here but also enjoying Pakistani food.

Talking exclusively to Geo News for segment “Game Changer” the 32-year-old fast bowler said that England’s plan against Pakistan in 3rd T20I was to do something different from what it did in 2nd T20I and it worked for them.

England’s fast bowler Mark Wood has said that he saw Pakistani bowlers how they’re doing their things and tried to bowl like them.

“I’ve tried to learn off the Pakistan bowlers, watching them how they go about things. I’m a big fan of Haris Rauf. I think he’s an excellent bowler and he bowls very fast too, same is Hasnain and I like him as well. So, I tried to learn off of those guys, and see how they’ve going about their business. They’ve bowled a lot where they’ve bowled people, people were trying to play across the line, and it’s just skidded through so I’m trying to be that bowler as well and just bowl as fast as I can and try and make something happen and get wickets,” he said.

Mark Wood, who was playing his first international game since March 2022, took 3 wickets conceding just 24 runs and dented Pakistan’s attempt to chase the target of 222 against England.

The fast bowler took wickets of Babar Azam and Haider Ali to put Pakistan on back foot in start and then got the wicket of Haris Rauf in his last over.

When asked about England’s strategy knowing how comfortably Pakistan had chased 200 just 24 hours ago, Mark Wood said that it was basically to be aggressive.

“I think that’s my role in the team, trying to be aggressive, trying to unsettle them. The day before we didn’t do any bouncers. We didn’t try around the wicket. We didn’t try different fields. So, today we just tried something different,” he said.

“Babar Azam is very good player same as Rizwan, fantastic player. The night before they were outstanding. So, this time it was literally just to try something different and hope it come off and luckily it did,” the England fast bowler said.

Replying to a question, the fast bowler said that he is enjoying his time in Pakistan.

“It was very loud today, it’s one of the loudest I’ve ever heard a crowd, it was a fantastic atmosphere,” he said about spectators at Karachi’s National Stadium during 3rd T20I.

“To be honest with you, the people in the hotel where we’re staying couldn’t be more helpful, very friendly and very helpful and just all-around nice people. So, really enjoying my time here and so far, it’s been great hospitality,” he said.

He also mentioned Daal as one of his favorite local dishes in Pakistan.

Mark Wood revealed that Moeen Ali has taught him couple of Urdu words and they’re “theek hai” and “kaisay hou”.