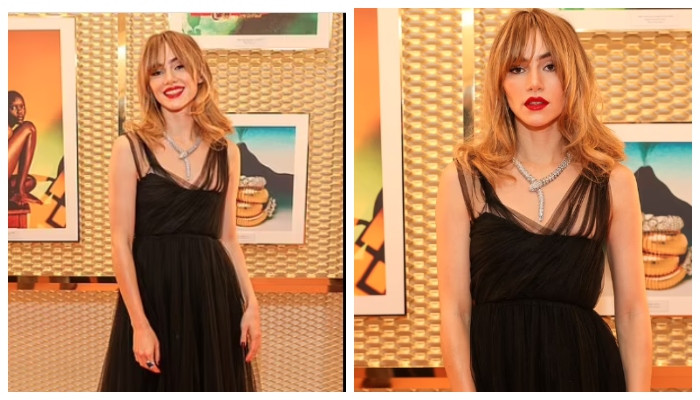 Suki Waterhouse looked effortlessly chic as she joined Poppy Delevingne for the launch of the Bulgari Serpenti Metamorphosis immersive experience exhibition at Saatchi Gallery in London on Thursday.

The model, 30, showed off her elegant style in an eye-catching black dress with a netted skirt as she arrived at the swanky fashion event.

Suki was looking out of this world as she put a glamorous figure in her full-length gown which boasted a sheer netted neckline and a distressed skirt.

The British beauty kept the look quite stylish with unusual block-heeled shoes and a serpent-inspired necklace, adding a pop of colour with a statement red lip.

Suki’s performance comes after she revealed that songwriting ‘was the one thing I had that was completely far away from being judged’ as she recently celebrated the release of her new record, Milk Teeth.

Suki addressed how she believed she was previously seen in the public eye through the lens of high-profile relationships with the likes of Bradley Cooper and Robert Pattinson.

She said: ‘Most things in my life, since I was 20, have been horribly public and embarrassing, but this (songwriting) was something I had control over.’

November saw the release of Suki’s latest music nearly a decade after her first single ‘Brutally’ was released on YouTube.