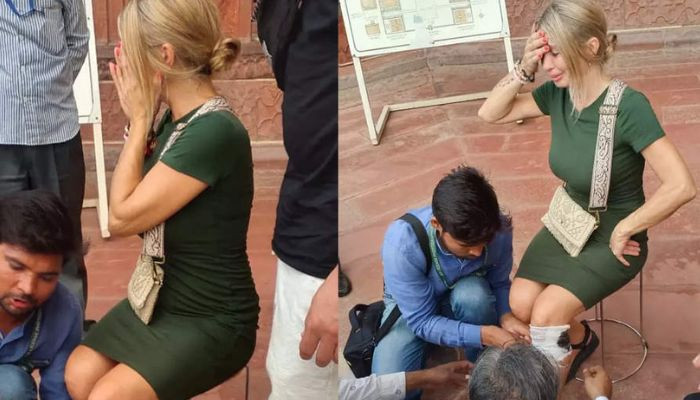 The tourist identified as Sandra was seen in tears in a video circulating on social media while some men bandage her injured leg.

She was admitted to a local hospital, according to India Today.

The woman was taking pictures of a monkey at the heritage site when she was attacked, said Prince Vajpayee, Conservation Assistant of Archaeological Survey of India (ASI) at the Taj Mahal. After being given first-aid, she was sent to the hospital for professional help.

A local photographer Sumit Solanki claimed that monkey attacks had increased in the past few days. He said that some people complained, but most left without doing so.

A senior tour guide, Monika Sharma too said that despite “repeated complaints”, monkey attacks were surging, reported the Times of India.

According to the Superintending Archaeologist at Taj Mahal, Raj Kumar Patel, a team of ASI staff to protect the tourists from monkeys had been deployed.

“We have informed the Agra Nagar Nigam and local administration about the menace of the monkeys on the Taj Mahal premises,” he said.

Solanki reported that a tourist from Tamil Nadu was attacked on Sept 11 as well and then another woman from Sweden. Two more women from Spain reportedly experienced these attacks on Sept 14.

Patel blamed the tourists, saying they got too close to them for pictures and selfies.