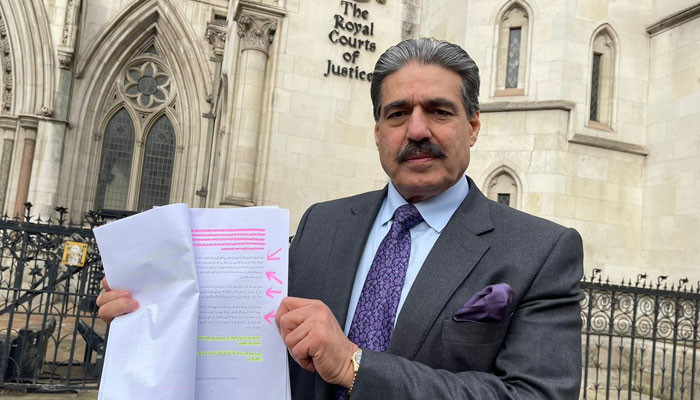 The news channel apologised to the PML-N leader and agreed to pay £90,000 in damages and almost the same amount in legal costs to the PML-N’s senior leader for levelling false allegations and linking him with the Italian Sicilian Mafia, the western Italian Godfather mafia, Kasur rape scandal, corruption, bribes, blackmailing and threats to the late accountability judge Arshad Malik in order to help Nawaz Sharif.

The news channel submitted a statement in writing to the London High Court, wherein it admitted that each and every allegation it made against Butt and PML-N supremo Nawaz Sharif in relation to Malik’s video scandal was false, defamatory, and baseless.

The news channel apologised to Butt before going to the full trial, after losing defamation meaning trial a few months back where it was determined that the PML-N leader was defamed at the highest level in four shows featuring Ayaz Amir, Habib Akram, Shahbaz Gill, Saad Rasool, and Firdous Ashiq Awan.

“We accept that Mr Nasir Butt is a man of good character and credibility. The false allegations were made against Mr Nasir Butt because of his role in obtaining a confession from the late accountability Judge Mr Malik that he had been blackmailed to convict the former Prime Minister of Pakistan, Nawaz Sharif, and that he regretted doing this to the innocent Nawaz Sharif,” the news channel told the court.

The TV channel aired an apology on its UK station, apologising to Butt and clearly stating that defamatory allegations by Amir and others should never have been made as there was no truth in these allegations.

The channel told the court and aired an apology which said that on July 6 and 7, 2019, it broadcast a show “Ikhtalafi Note” in which it was asserted by Awan and Gill that Butt is a killer, drug dealer, a fugitive from justice, a multiple murderer, and a disreputable character who could have been trying to bribe the judge before making his video.

On 12 July 2019, Amir linked Butt with Italian Sicilian Mafia asserting that the PML-N leader is the sort of disreputable character who would be used by organised crime bosses to carry out their blackmail enterprises. It was also said by Amir that Butt could easily be imagined doing so, both generally and in the present case.

“We unconditionally apologise to Mr Nasir Butt for the distress, upset and harassment which these broadcasts have caused him. We have agreed to pay Mr Nasir Butt substantial damages and legal costs,” said the TV channel.

Amir had alleged that Butt was acting on instructions of Nawaz in a mafia-style to trap Malik. The analyst had said: “And how the Sicilian Mafia operates? He had only portrayed a scene, but [in this case] it is a matter of one step further from the mafia. From America’s Al Capone to date, various tactics have been used to influence the judges. And there are also some Butt sahibs, some Janjuas there who carry out such tasks. And there’s an Al Capone sitting behind.”

He also alleged that Butt must have blackmailed, threatened and bribed the judge in the same way Kasur rapists exploited dozens of children by blackmailing them.

Butt had taken action against the channel stressing in his claim that he was not a multiple murderer, leader of a criminal gang or a drug-selling network leader, and that he had not left Pakistan in order to avoid prosecution for criminal offences. He further stressed that he was not involved in blackmail, including blackmail of judges involving sexual misconduct.

Butt had come under attack from Pakistani media and the then government of Imran Khan after he filmed judge malik and passed the film to PML-N Senior Vice President Maryam Nawaz before leaving for London.

The PTI government launched a huge crackdown against Butt after Maryam addressed an explosive press conference on July 6, 2019, in Lahore and revealed that the accountability judge had contacted Butt and told him that he was feeling “guilt” and “having nightmares” after announcing the “unjust” verdict against Nawaz and then played a video showing Butt and the judge talking to each other.

Butt started defamation proceedings at the UK High Court against several Pakistani TV channels for defaming him. Before settling his case with the TV channel, Butt has already won two separate cases from two other private news channels. His barrister has told the court that he has live cases against two more TV channels at the High Court.