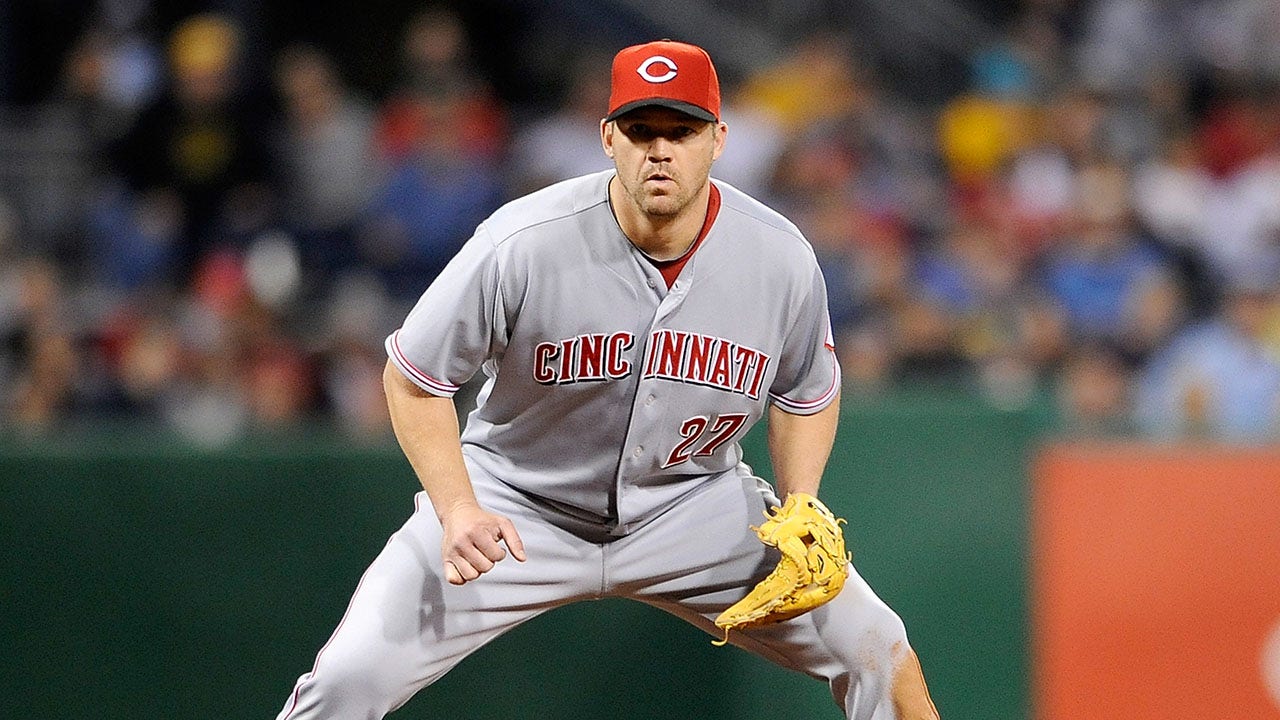 Third baseman Scott Rolen was narrowly elected to the Baseball Hall of Fame on Tuesday night.

He received 76.3% of the votes from the Baseball Writers’ Association of America. Players have to reach 75% of the vote to make it to Cooperstown. Rolen cleared that threshold by five out of 389 votes.

Rolen was spending time with his parents when he learned he would be enshrined in the Hall of Fame, and one of his former teams, the Cincinnati Reds, shared an emotional video of his celebration with his family.

Scott Rolen #27 of the Cincinnati Reds stands ready at third base during the game against the Pittsburgh Pirates on September 29, 2012 at PNC Park in Pittsburgh, Pennsylvania.
(Photo by Joe Sargent/Getty Images)

The seven-time MLB All-Star is seen embracing his mother after he shares the news before others in the room began cheering and applauding.

“What’s going on? I cannot believe it,” his father is heard saying. “Oh my Lord.”

Only 17 other third basemen have made it to Cooperstown, Rolen will be the 18th.

The last third baseman to be elected to the Hall of Fame was longtime Atlanta Braves infielder Chipper Jones in 2018. Prior to that, no other third baseman had been elected since Wade Boggs in 2005.

Aside from his tenure with the Reds, Rolen spent time with the Philadelphia Phillies, St. Louis Cardinals, Toronto Blue Jays. He retired in 2012.

Scott Rolen of the St. Louis Cardinals celebrates a title following Game Five of the 2006 World Series on October 27, 2006 at Busch Stadium in St. Louis, Missouri.  The Cardinals defeated the Tigers 4-2.
(Ron Vesely/MLB via Getty Images)

During his playing days, Rolen was considered of the best defensive third basemen in the league. He received Rookie of the Year honors in 1997 and won the 2006 World Series with the St. Louis Cardinals.

He was inducted into the franchise’s Hall of Fame in 2019.

Scott Rolen #27 of the Cincinnati Reds leaps as Todd Helton #17 of the Colorado Rockies slides safely into third base in the sixth inning of a game at Coors Field on July 28, 2012 in Denver, Colorado. The Reds defeated the Rockies 9-7.
(Dustin Bradford/Getty Images)

Former first baseman Fred McGriff, who was voted in last month by the Contemporary Era Committee, will join Rolen in being inducted in July.

Rolen did not reveal the baseball cap he will choose to have displayed on his Hall of Fame plaque. He was in disbelief that he was chosen to be in the Hall of Fame.

“There was never a point in my life I thought I was going to be a Hall of Fame baseball player,” Rolen said on Tuesday.