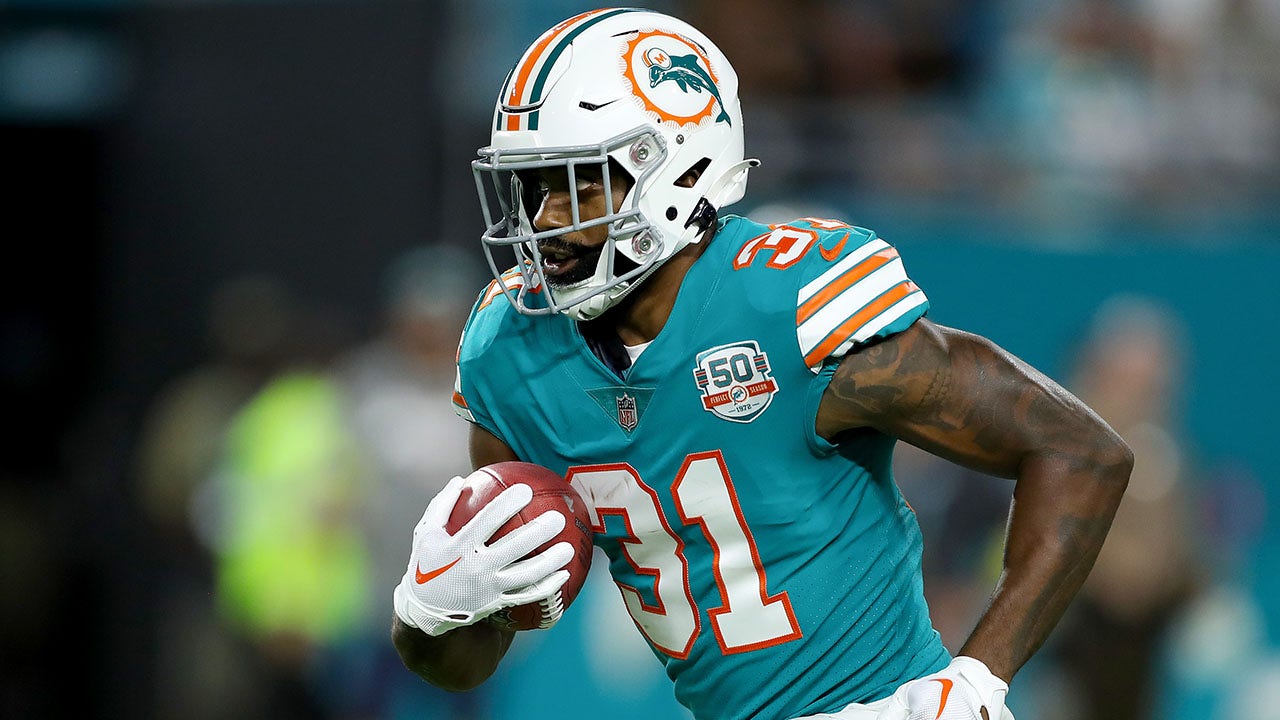 Veteran NFL running back Raheem Mostert was close to winning his first Super Bowl ring in 2019 with the San Francisco 49ers when Pro Bowl wideout Tyreek Hill made an incredible catch that would ultimately shift the momentum of the game to give the Kansas City Chiefs the title.

The two are back together, but this time Mostert hopes they’ll both walk away winners.

Tyreek Hill (10) of the Miami Dolphins carries the ball after a catch during the fourth quarter of a game against the Minnesota Vikings at Hard Rock Stadium Oct. 16, 2022, in Miami Gardens, Fla.
(Kevin Sabitus/Getty Images)

“It’s a tremendous opportunity to have a guy like him,” Mostert told Fox News Digital in an interview this week when asked about getting the chance to play alongside Hill this season for the Miami Dolphins.

TUA TAGOVAILOA ‘NOT AFRAID’ OF SUPER BOWL TALK AFTER NFL TRADE DEADLINE: ‘FULL BELIEF THAT WE ARE CAPABLE’

“Jaylen (Waddle) and also Tua (Tagovailoa) — those three guys right there, man, definitely optimize what it means to have a high-paced offense, to be out there and put points on the board and make plays. And I’m thrilled to be in that role with them.”

Mostert played six seasons with the Niners before suffering a significant knee injury that cut his 2021 season short. He signed with the Dolphins in March, reuniting with former offensive coordinator Mike McDaniel, and just days later, the team announced it had acquired Hill in a trade with Kansas City.

“We just gotta keep growing week in and week out and keep doing the things that we’ve been doing because it’s going to help in the long run. And hopefully me and Tyreek could share a ring together this time,” Mostert said with a laugh. “That’s really what it all boils down to, is the capability to go out there and do the things that we got to do to win that Super Bowl.”

Tua Tagovailoa (1) of the Miami Dolphins hands the ball off to Raheem Mostert (31) against the Detroit Lions during the first quarter at Ford Field Oct. 30, 2022, in Detroit.
(Rey Del Rio/Getty Images)

With the Chiefs trailing by 10 on a third and long with just over seven minutes in the game, Hill hauled in a 44-yard pass from Patrick Mahomes, a play that would turn the game around and cost Mostert his first ring.

“I still can’t believe he caught it,” Mostert laughed.

The Dolphins continued to bolster their team this week with the additions of Pro Bowl edge rusher Bradley Chubb and running back Jeff Wilson Jr., a move that came shortly after Mostert’s interview with Fox News Digital.

Wilson also played under McDaniel in San Francisco, a familiarity that Mostert spoke highly of from his own experience.

“[McDaniel] knows who I am. He knows the person that he’s going to get and the player that I’m able to be out there on the field … It’s just a blessing.”

In his first year as an NFL head coach, McDaniel has seemingly won over the locker room with ease.

“Me and him are very similar,” Mostert said of his relationship with McDaniel. “He had to really work his way up into the position that he’s in now as a coach. But he started out as a guy that was just collecting papers for coaches and doing midnight shifts in the offices and stuff like that, drawing up plays for a scout team and then working his way up until a position role, being a receivers coach over in Cleveland and then working his way into the offensive role as being the run game coordinator with me in San Francisco.”

“I can relate to him so much because that’s how my career was. Growing up in this league, starting out as an undrafted rookie, being the last pick with the Eagles my rookie year and making practice squad and then just being cut several times.

“Just not being able to get the opportunity. But once I got my opportunity, I was able to capitalize on it. Same thing with him. He got his opportunity as offensive coordinator last year, and then it just catapulted him into a head coaching position. And he’s doing a magnificent job.”

The Dolphins started the season 3-0 before an injury to their quarterback rattled the team. They recovered with back-to-back wins in Week 7 and 8 to improve to 5-3, but Mostert credits much of that to McDaniel’s leadership.

Mostert recently partnered with Crest and Oral-B in a campaign geared toward improving youth access to basic oral care.

“I’m thankful that I’m able to take care of my teeth and be in the position that I am and to give back and to do the little things,” Mostert said of the campaign. “You know, there’s kids out there that don’t have the access to find the right care and the right resources in order to take care of their teeth … and that’s the reason why I partnered with them.”

For the month of November, Crest and Oral-B will donate products to a child in need for every purchase.