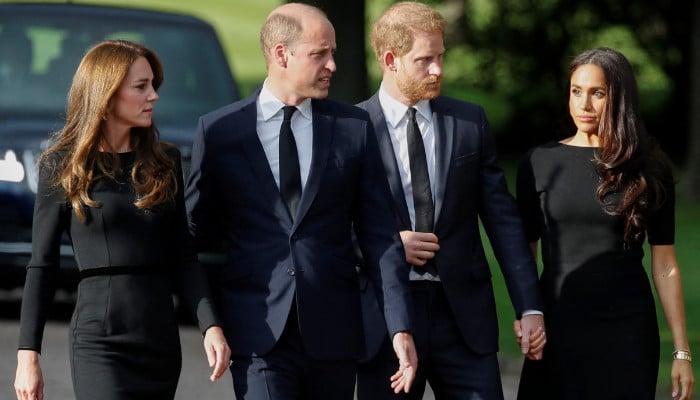 Prince Harry and Meghan Markle reportedly went out of their way to engage with Prince William and his wife Kate Middleton during their time in the UK after the Queen’s death, royal insiders have claimed.

The ‘Fab Four’ were rumoured to have reunited amid the Queen’s death after they stepped out together in Windsor to meet mourners queueing outside the royal residence, however, insiders have said that they actually did not interact with each other much or at all save for at one occasion.

The Sunday Times reported that last Thursday, September 15, 2022, days after the Queen’s death, Prince Harry and Prince William ran into each other while in their cars.

According to sources, William was returning to Windsor with his kids Prince George, Princess Charlotte, and Prince Louis, while Prince Harry was in his own car with wife Meghan.

As their cars drove past each other, Prince Harry had his cat stopped and reversed to meet with his brother, and also rolled his windows down to share a small chat.

No other details of the meeting have been revealed since.

Prince Harry and Meghan have reportedly already left the UK to reunite with their kids Archie Harrison and Lilibet Diana in the US, just about two days after the Queen’s state funeral on September 19, 2022.