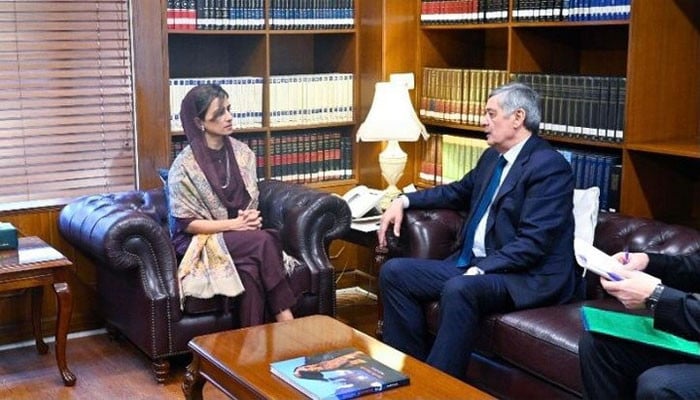 During a meeting, both discussed the issues related to regional security and stressed the importance of working together to promote regional peace and stability, a statement from the Ministry of Foreign Affairs said.

The two sides also expressed their commitment to promote regional solutions through the Moscow Format and Neighbouring Countries of Afghanistan.

They also emphasised the need for “practical engagement” with the Interim Afghan government, the statement said.

Underscoring that a peaceful neighbourhood remained a strategic imperative for Pakistan, the minister stressed that Afghanistan — with its location as a bridge between Central and South Asia — was central towards achieving the full potential of socio-economic development and regional connectivity.

The minister of state reaffirmed Pakistan’s commitment to work with other regional countries towards this end, the statement added.

With reference to the humanitarian crisis in Afghanistan and the need for dire economic assistance from the international community, Khar also expressed Pakistan’s solidarity with the Afghan people.

She urged the international community “to continue extending assistance and support, in order to address urgent humanitarian needs and to provide a sustainable pathway for Afghanistan’s prosperity and development”.

The statement also noted that Ambassador Kabulov earlier met the Special Assistant to the Prime Minister and Special Representative on Afghan Affairs Muhammad Sadiq in which both sides agreed to remain actively engaged with a view to promoting regional peace, stability and economic development.

The meeting comes as the exacerbating socio-economic crisis continues to haunt the security and regional stability.

Since the US departed from Afghanistan, the Taliban took control of Kabul and installed an interim government which is not recognised by any country.

The weak interim government in Afghanistan and the possibility of different terrorist organisations rendering Afghanistan their launching pad concerned all the regional countries, most importantly Pakistan as Islamabad has witnessed a recent uptick in terrorist activities.

After the ascendence of the Taliban, the US and international community froze Afghan assets abroad which made it difficult for the interim government to run their financial operations.

It further aggravated the economic situation in Afghanistan, forcing people to flee to other neighbouring countries. It also enabled the possibility for the terrorists to cross borders and launch their activities in other states.

Furthermore, the interim Afghan government is also under severe strain as their crackdown on women’s and girls’ rights intensified.