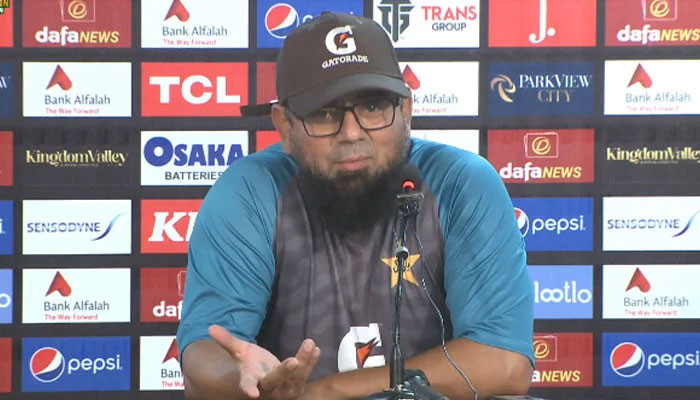 Saqlain Mushtaq, the head coach of the Pakistan cricket team, downplayed the team’s loss in the third Twenty20 International on Friday, saying that it is “the system of nature that we win sometimes and lose also.”

“Winning and losing is part of the game,” said the head coach, addressing a press conference after the defeat by 63 runs against England in the third T20I.

Saqlain said, “By talking about the middle order so frequently, you are influencing our minds. By frequently referring to the middle order, you are undermining the players’ confidence in this manner.” He underscored the need for every Pakistani to repose trust in the skipper, coach and players.

The head coach said Pakistan triumphed yesterday, and they (England) made it today, so it shows the team will win whose plans work.

He said the Pakistani team consists of the best available players. “We have full confidence in our players. We will have to repose this confidence in them,” he said. However, there are some concerns, and efforts are being made to do away with them, he said.

Saqlain said the Pakistan bowling appeared to be lacking a lot in the third match of the England series. “Our bowlers made a lot of mistakes. Our plans were not good, either,” he said.

Brook scored a 35-ball 81 not out while Duckett cracked an unbeaten 42-ball 69 to lead England to an impressive 221-3 in their 20 overs after they were sent in to bat at the National stadium.

Shan Masood led Pakistan’s recovery in a 40-ball 65 not out but they finished well short on 158-8 in 20 overs to give England a 2-1 lead in the seven-match series.

The match proved an anti-climax to Pakistan’s big ten-wicket win in the second game on Thursday that avenged their first game defeat by five wickets two days earlier, both in Karachi.