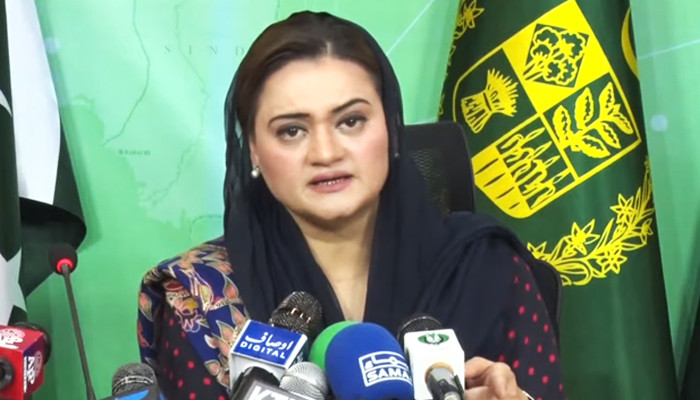 Federal Minister for Information Marriyum Aurangzeb said Wednesday the coalition government had no hand in Pakistan Tehreek-e-Insaf (PTI) Senior Vice President Fawad Chaudhry’s arrest, clarifying that “we have the same power as PTI did while in power, but we will not use it for political victimisation”.

“Some people are attempting to portray that Fawad Chaudhry’s arrest was politically motivated. But let me take the opportunity and clarify: if we wanted to arrest [our political opponents], then the entire top-tier PTI leadership would be behind bars. It is not politically motivated,” the minister said in a press conference.

Fawad was arrested from his residence earlier today after he publicly “threatened” the members of the Election Commission of Pakistan (ECP) in a media talk outside Imran Khan’s residence in Zaman Park a day ago.

Speaking to the media at a court in Lahore, where the police presented him for obtaining remand, Fawad said that he is “proud” of the case that has been registered against him.

As PTI workers protested at GT Road in Jhelum, the police also rounded up Fawad’s brother Faraz Chaudhry. However, a local magistrate released him on bail after a brief detention.

In her presser, the federal minister noted that it was not the government that had registered the case against Fawad, rather, ECP Secretary Omer Hamid Khan had lodged the first information report (FIR).

“For the past nine months, we were in power, but we did not resort to the tactics that PTI used. During their tenure, ministers and Imran Khan, himself would hold press conferences and describe how their political opponents would be arrested later.”

The federal minister said that during Khan’s government, a daughter was arrested in front of her father — referring to the time when Pakistan Muslim League-Nawaz (PML-N) Senior Vice President Maryam was taken into custody while PML-N supremo Nawaz Sharif was in jail.

In a statement, the spokesperson further slammed Fawad for “sowing the seeds of hypocrisy in the political system,” adding that he had ridiculed state institutions and had started to insult political opponents, which was not acceptable.

The statement mentioned that the former federal minister had threatened to bring the heads of the constitutional institutions to their graves, which was “unforgivable.”

The spokesperson also referred to former senator Nehal Hashmi, who was disqualified by the Supreme court and sentenced to one month in jail for contempt of court in February 2021.

Stating that Hashmi was disqualified and arrested for directly criticising SC judges, the statement continued: “Daniyal Aziz and Talal Chaudhary were disqualified for criticising the SC decision. Everyone is equal in the eyes of the law, no one is above the law, so Chaudhary too should face the consequences of his threats.”

Emphasising that there should be no discrimination in law and that the judiciary should review the matter, the spokesperson said “The law will take its course against Fawad Chaudhary.”

The spokesperson also commented on the relationship between the PTI and the establishment, saying that “as General Bajwa brought him to power, ran his government, crushed all the opposition, the PTI was happy with him. When the general confined himself to a constitutional role, he immediately became the villain.

“In the four years of Buzdar government, more IGs and chief secretaries have been changed than in 10 years of the PML-N government.

“The parliament, judiciary, army, and media — there is no institution left which has not been ridiculed by the PTI,” the spokesperson added, “Imran Khan thinks that if everyone comes under his control, Pakistan will be saved.”