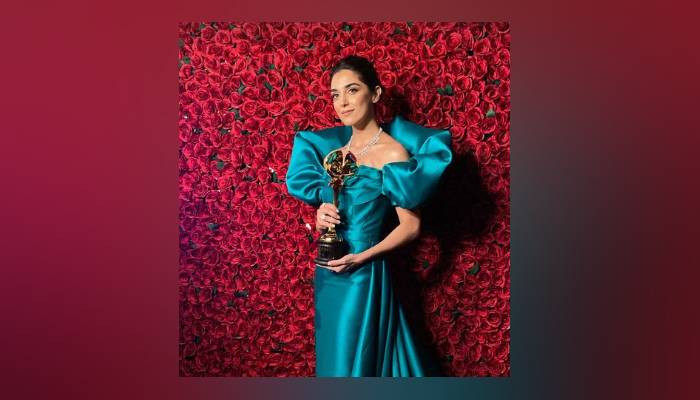 Pakistani actress Maya Ali is on cloud nine as she’s received the Pakistani Actress of the Year Award for her exceptional acting at Distinctive International Arab Festival Awards 2022 in Dubai on Friday.

Reportedly, three days ago, the DIAFA took to Instagram and posted a photo of Teefa in Trouble actress.

Sharing the post, they captioned it, “Pakistan. This is for you! Announcing this year’s recipient of the Pakistani Actress of the Year award.”

According to DIAFA’s official website, “the award is a unique annual red carpet and awards ceremony that honours distinguished Arab personalities and celebrities from all around the world, in recognition of their achievements and contributions towards committees and society’s betterment”.

Freelance writer Sadiq Salim shared a small clip of Maya’s acceptance speech on his IG from the Award night.

In the video, Maya looked stunning in emerald green long dress as she said she’s “speechless” after being honoured with this award.

The actress thanked DIAFA for “honouring” and “recognising’ her work as well as she sent love to all her fans back home in Pakistan who made this happen for her.

Maya has shown her brilliant performances in dramas like Diyar-e-Dil, Mann Mayal and many others. She also did two movies, one with Ali Zafar and other was Parey Hut Love for which she bagged two nominations at Lux Style Award.

Meanwhile, DIAFA began in 2017 and had held four award shows till now. Previously, Mahira Khan and Sajal Aly were awarded for their contribution in the entertainment industry.