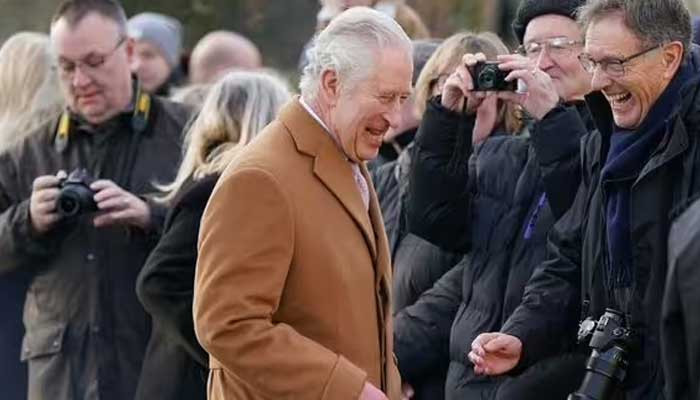 King Charles III has appeared snubbing his younger son Prince Harry for his explosive claims against the royal family during the Britain’s new monarch’ appearance at Sunday service in Norfolk.

The Britain’s new King appeared in high spirit as he caught on camera smiling amid the Duke of Sussex’s allegations against the palace.

Charles’ confidence suggests as he does not takes Harry’s revelations about the royal family serious as he knows Harry would soon realalise his blunders of discussing family talks in public, according to an insider.

King Charles was all smiles as he appeared for the first time after a week of attacks from Prince Harry.

Lillis were dancing on the King’s cheeks as he arrived at St. Lawrence’s Church in Castle Rising for a service ahead of his youngest son’s bombshell memoir’s release and new interview.

Charles, who was dressed in a shirt and tie with a dinosaur pattern, was greeted by well-wishers during an impromptu walkabout outside St. Lawrence’s Church. The King, 74, beamed as he mingled with a crowd of people who had gathered to see His Royal Highness.

The King’s appearance comes after Harry launched a series of allegations against the Royal Family, including that his brother Prince William physically attacked him in a row during which Harry claims Meghan, Duchess of Sussex, was labelled “rude” and “abrasive”.

Broadcaster Jonathan Dimbleby, who interviewed Charles in 1994 when the then Prince of Wales admitted having an affair, said he was “perplexed” by Harry’s decision to publish a book.

However, Broadcaster Jonathan Dimbleby thinks King Charles is “extremely pained” and “very frustrated” by the situation and “would be very anxious to bring it to an end”.