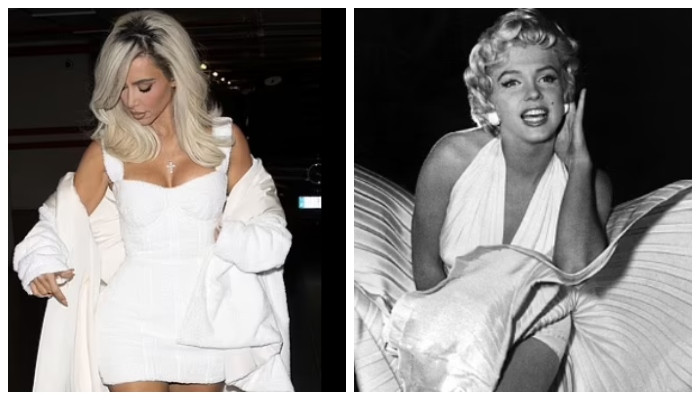 Kim Kardashian looked incredible as she channeled Marilyn Monroe again months after wearing the icon’s dress at the Met Gala.

The 41-year-old reality star looked effortlessly chic in a bold white Dolce & Gabbana mini dress and had her dyed-blonde locks perfectly blow-dried as she stepped out during Milan Fashion Week on Friday.

To further enhance her look, Kim added inches to her height with matching white peep-toe heels and had a long matching coat slung over her shoulders.

Kim accessorised her look with silver cross necklaces and opted for a typically glamorous makeup look complete with a light pink lip.

It comes just a day after she channeled Marilyn again for a Dolce & Gabbana advert as Ana de Armas is set to play her in a soon-to-be-released biopic.

The campaign comes at an interesting time as Ana de Armas stars as Marilyn Monroe in the biopic Blonde which will expand to more theaters on September 23, before premiering on Netflix on September 28.

Back in June, Kim was at the center of controversy as a Marilyn Monroe devotee accused her of damaging the iconic nude gown the actress wore to sing ‘Happy Birthday’ to then-President John F. Kennedy in 1962 when she modeled it at the Met Gala the previous month.