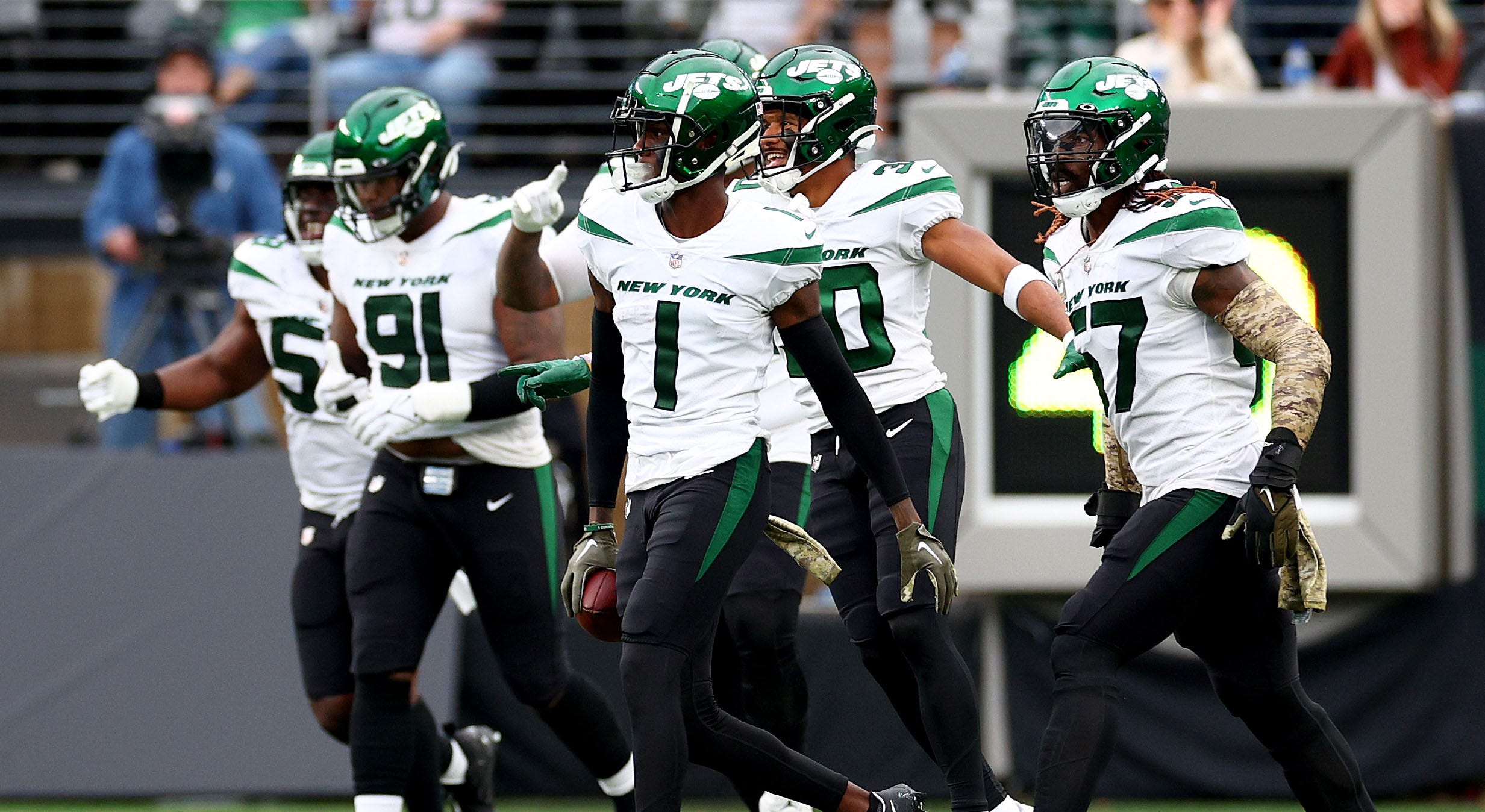 No one expected Buffalo Bills quarterback Josh Allen to have to scramble on 4th-and-21 and heave a ball downfield in a last-ditch effort to at least tie the New York Jets. But that effort resulted in a dropped pass by Gabriel Davis as the Jets upset their division rival, 20-17, at MetLife Stadium on Sunday afternoon.

The Jets’ defense gave the Bills problems all day, and Allen, who threw two interceptions last week, did the same thing against this unit. The Bills’ first drive of the game was going so well, after a botched kickoff gave them perfect field position, which Stefon Diggs used to set up a quick red zone situation with a 41-yard catch.

But Allen underestimated Jordan Whitehead’s speed on a pass to Dawson Knox as he stepped right in front and picked it off.

Josh Allen (17) of the Buffalo Bills rushes for a touchdown against the New York Jets during the second quarter at MetLife Stadium, Nov. 6, 2022, in East Rutherford, New Jersey.
(Mike Stobe/Getty Images)

However, the bigger interception came on the first Bills drive of the second half, during which Allen was looking for Davis, but Sauce Gardner had other things in mind. Gardner took the ball 16 yards to the Bills’ 19-yard line, setting up the go-ahead score by James Robinson on a seven-yard Zach Wilson pass.

The lead wouldn’t flip the other way for the rest of the game.

Buffalo would tie it with a 51-yard field goal by Tyler Bass, but after punts from both teams, the Jets took 6:10 off the clock in the fourth quarter as they ran the ball down the Bills’ throat to set up a short field goal attempt by Greg Zuerlein, who knocked it home from 28 yards out for the 20-17 lead.

JETS’ JOE DOUGLAS ON STICKING WITH ELIJAH MOORE, DENZEL MIMS PAST TRADE DEADLINE: ‘WE LOVE BOTH THESE GUYS’

The Jets’ defense, knowing that 1:43 was enough left for not just a Bills tie but to end the game with a touchdown, locked in and got to Allen on second down. Bryce Huff caused a fumble that the Bills recovered, but they couldn’t recover the drive.

Zach Wilson (2) of the New York Jets scrambles against the Buffalo Bills during the second half at MetLife Stadium on Nov. 6, 2022, in East Rutherford, New Jersey.
(Elsa/Getty Images)

As they have in their other wins this season, the Jets’ run game helped set the tone for the offense. Michael Carter led it with 76 yards and the Jets’ first touchdown of the game. Robinson had 48 yards on 13 carries.

Wilson had 154 yards through the air and rookie Garrett Wilson was his favorite target, catching eight for 92 yards (nine targets).

Allen finished the game without a passing touchdown, but he did have the only touchdowns of the game for Buffalo on the ground. He led the team in rushing with 86 yards on nine carries, including a 36-yard touchdown on a designed run in the first half.

Sauce Gardner (1) of the New York Jets celebrates after an interception against the Buffalo Bills during the first quarter at MetLife Stadium on Nov. 6, 2022, in East Rutherford, New Jersey.
(Elsa/Getty Images)

The Bills will need to bounce back against a tough Minnesota Vikings team next week, while the Jets will have another shot at the New England Patriots following their bye week.