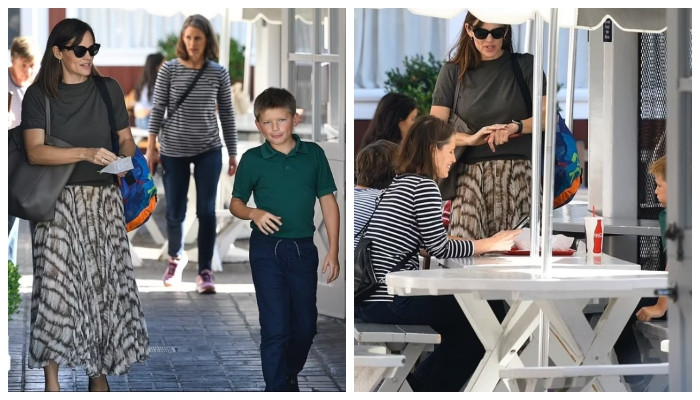 Jennifer Garner cut a classy figure in a chic skirt as she enjoyed some family time on Wednesday.

Ben Affleck’s ex was seen with her look-alike sister Melissa as well as her mother Patricia Ann, 84, and son Samuel, 10, as she spent time at the Country Mart in the Brentwood neighborhood of Los Angeles.

In the pictures obtained by DailyMail, Jennifer was seen wearing her diamond eternity band that may be from her longtime beau, 44-year-old businessman John Miller.

Jennifer wore a short-sleeved dark green sweater with a skirt in the same green color with a beige background.

Even her purse was green, making the entire outfit pull together.

The Catch And Release actress also had on sunglasses with her hair down.

The family sat outside on a white picnic bench with food on a red tray and a to-go drink.

They all seemed to be in great spirits as they chatted.

The 13 Going On 30 has been dating 44-year-old businessman Miller for many years.

It is not known if they are engaged or not as Garner remains very private about her love life.

Garner has been nothing if not overly supportive of her ex-husband, Affleck.

Hollywood’s all-American girl has been by Affleck’s side for years, despite their 2017 split after 12 years of marriage.