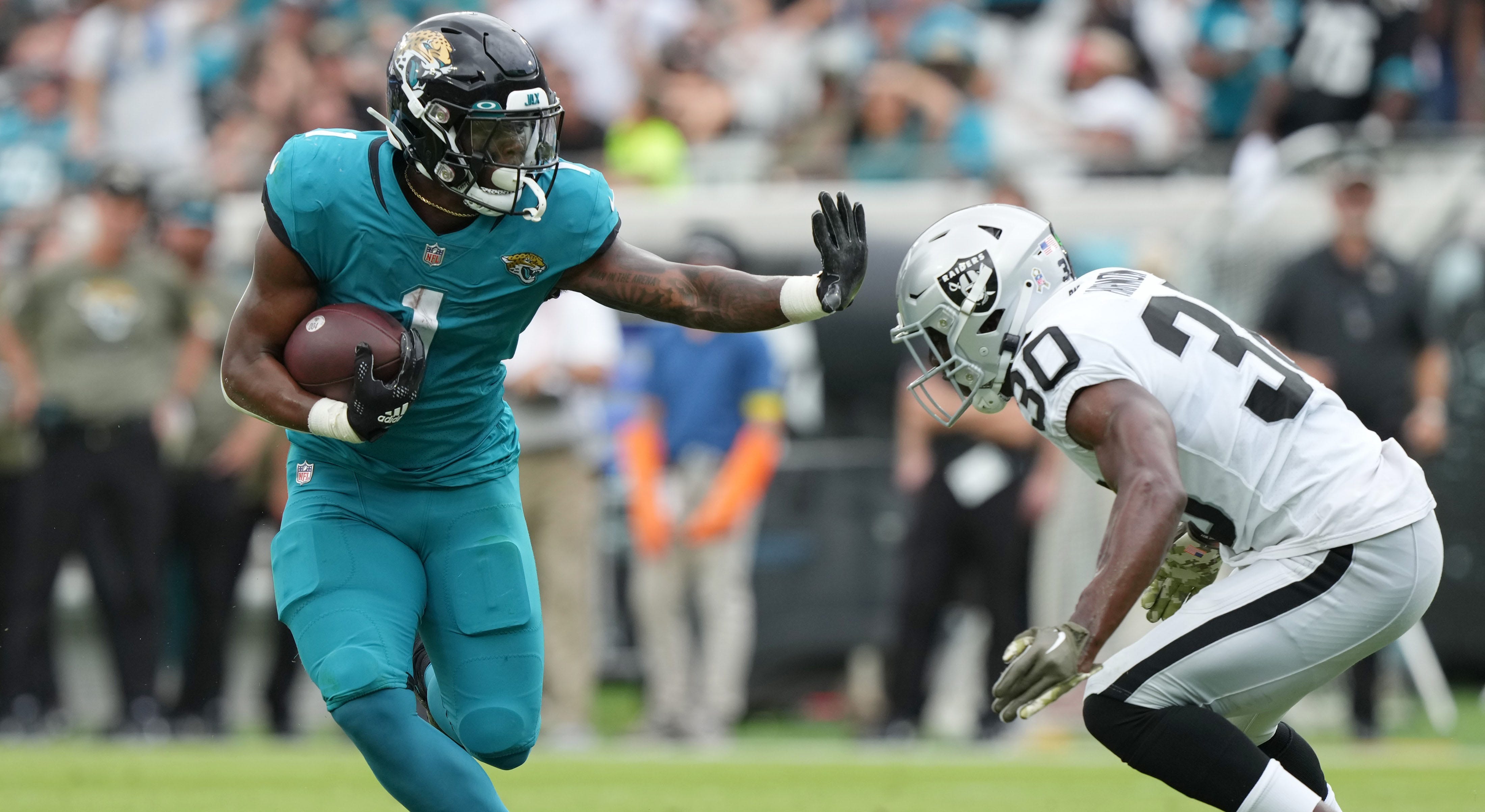 The Jacksonville Jaguars kept the Las Vegas Raiders off the board in the second half, leading to a 27-20 victory on their home turf Sunday.

Jacksonville went into the locker room with a 20-10 deficit, as the Raiders were off to a hot start in this ball game. But the defense was able to step up, and the offense capitalized with 17 second-half points (20 unanswered), including a Christian Kirk 7-yard touchdown catch and a Travis Etienne Jr. 5-yard rush.

Etienne was once again the leader of the Jags’ offense. He had two touchdowns and 109 yards rushing on 28 attempts since he took over as the team’s starting running back with James Robinson dealt away to the New York Jets.

Davante Adams (17) of the Las Vegas Raiders reacts after catching a pass for a touchdown in the first quarter against the Jacksonville Jaguars at TIAA Bank Field on Nov. 6, 2022, in Jacksonville, Florida.
(Eric Espada/Getty Images)

Trevor Lawrence threw for 235 yards, with his one touchdown pass to Kirk, and relied on that run game to play efficiently throughout the game (25 for 31).

For the Raiders, Derek Carr and Davante Adams showed off their chemistry early on, but they couldn’t make it count in the end. Adams had two first-half scores and had 146 yards on 10 catches for the game (17 targets).

The first was a 25-yard reception to get the Raiders on the board first. He followed that up with a 38-yarder from Carr that made it 17-0 Raiders.

Roy Robertson-Harris (95) of the Jacksonville Jaguars celebrates after making a tackle in the first quarter against the Las Vegas Raiders at TIAA Bank Field on Nov. 6, 2022, in Jacksonville, Florida.
(Eric Espada/Getty Images)

Carr tried Adams twice on the last drive of the game, but the Jags’ defense didn’t let him catch the passes. On third down, they followed up with a sack and an eventual fumble on a lateral play would ice the game for the Jaguars.

Other than Adams, the Raiders saw Josh Jacobs rush for 67 yards on 17 carries.

The Raiders are now 2-6 on the season and reeling, and they will have to face the Indianapolis Colts in Las Vegas next Sunday.

Travis Etienne Jr. (1) of the Jacksonville Jaguars rushes the ball against the Las Vegas Raiders during the second quarter at TIAA Bank Field on Nov. 6, 2022, in Jacksonville, Florida.
(Eric Espada/Getty Images)

The Jaguars, though, snapped their five-game losing streak and have a tough test against the Kansas City Chiefs on the road next week.