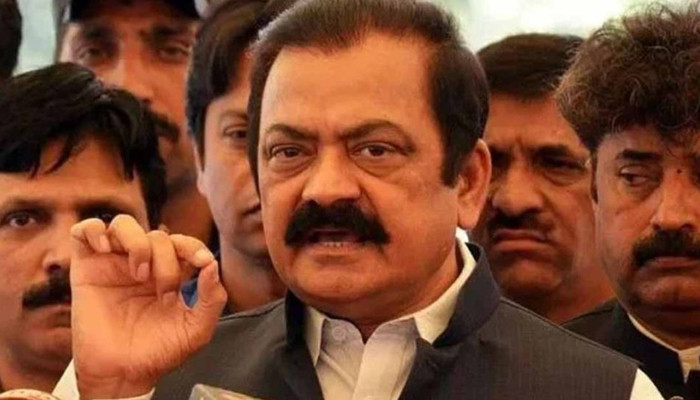 Speaking during Geo News’ programme “Naya Pakistan”, the minister said, “Imran Khan only has one demand: he wants to be adopted by the institutions to make him sit on the prime minister’s chair.”

“Institutions, government, Parliament, and the judiciary should stand against his wretched agenda,” he said adding that the PTI chief will never be successful in his agenda against the country and the nation.

The minister said that Khan should avoid talking about something if it isn’t true, but he does so because it “strengthens his political agenda”.

Sanaullah maintained that the former premier “doesn’t even care about his self-respect.”

On delay in lodging FIR

The minister warned that PTI chief would involve the institution if he names a senior military official in the first information report (FIR) related to the assassination attempt on his life.

Sanaullah said that Khan has bent upon lodging an FIR against the officials of the institution.

“If a false FIR is lodged against a senior officer, what kind of comments will be made in our neighbouring country?” he added.

Responding to a question about the delay in lodging the FIR, the interior minister said that there would be obstacles if you wanted to lodge a case against the “state”.

“The police have the right to refuse if a fraudster wants to register a case for his [certain] purposes,” he added. The PTI leader is pressurising institutions to fulfil his nefarious design, said the interior minister.

‘Swati’s presser based on hoax’

Commenting on the alleged obscene video of PTI Senator Azam Khan Swati, the interior minister said: “You can find out in three seconds that the video is fake. He [Swati] should have asked to investigate and punish the video’s maker and sender.”

The minister said that the PTI leader instead acknowledged the video and identified the place just to level allegations. Sanaullah reasoned that it should have at least been established first if the video was fake or not.

“The press conference was based on a hoax. What was the need to confirm when the video was received by them?” the minister said.