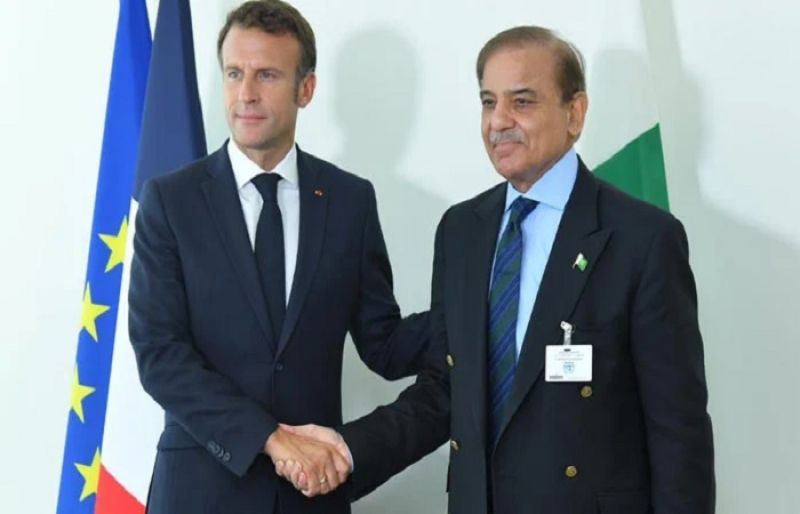 In an act of compassion, France has stepped forth to assist in the revival of Pakistan’s economy and its reconstruction in the wake of devastating floods, with an international conference this year.

Prime Minister Muhammad Shehbaz Sharif and French President Emmanuel Macron had a meeting on the sidelines of the 77th Session of the UN General Assembly (UNGA) in New York on Tuesday.

Besides the exchange of views on the enhancement of bilateral relations, the two leaders spoke about mobilising international support for Pakistan to help recover and rebuild its economy on a sustainable footing in the aftermath of the climate change induced floods.

In order to gather the relevant International Financial partners and development partners, France will host an international conference before the end of the year aiming at contributing to the rehabilitation and the reconstruction of flood-affected areas of Pakistan and, with the help of climate-resilient reconstruction-related financing, to accelerate the transition to renewable energy.

The premier also had a meeting with Spanish President Pedro Sanchez on the sidelines of UNGA.

PM Shehbaz stressed the need for deepening the multifaceted Pakistan-Spain relations with a particular emphasis on inter-parliamentary ties as well as security and defence cooperation.

The Spanish president called for bilateral collaboration in the energy sector and people-to-people links.

The prime minister appreciated the support and solidarity of the Spanish government in the wake of climate-induced massive floods in Pakistan and thanked for the relief assistance extended by Spain to the affected people. He shared the details of the devastation caused by the floods to crops, housing, livestock and critical infrastructure.

The prime minister underlined that Pakistan was among the most vulnerable countries to the impacts of climate change. He hoped the international community would step up and help mitigate the adverse effects of the floods through active participation in the rehabilitation and reconstruction phase.

In the regional context, the prime minister underlined Pakistan’s support for an inclusive, peaceful, stable, prosperous and connected Afghanistan. He added that Afghanistan faced a grave humanitarian situation as well as formidable challenges to its economy.

He stressed that sustained, practical and meaningful engagement of the international community with Afghanistan was essential for ensuring the welfare of the Afghan people and for promoting shared goals of peace, security and development in the country.

The PM extended an invitation to President Sanchez to visit Pakistan at his earliest convenience. In a separate meeting, Shehbaz Sharif and Chancellor of Austria Karl Nehammer reviewed bilateral relations and exchanged views on regional issues.

The prime minister highlighted the immense devastation caused by the unprecedented climate-induced floods in Pakistan and the government’s actions to address the colossal challenge. He thanked Austria for its steadfast support for the GSP+ scheme, stressing that the mutually-beneficial arrangement had yielded positive results for both sides.

The prime minister also met Iranian President Seyed Ebrahim Raisi and reiterated his gratitude to the government and people of Iran for their solidarity and support with the Pakistani nation in the wake of massive floods.

During the meeting, the two leaders agreed to deepen and broaden bilateral cooperation across a broad range of areas, including economic and trade, energy and connectivity, cultural contacts, and people-to-people links.

The prime minister conveyed that Pakistan highly valued the supreme leader’s strong and steadfast support for the just struggle of the people of Indian Illegally Occupied Jammu and Kashmir (IIOJ&K).

The prime minister reached the UN Headquarters to attend a welcome reception hosted by UN Secretary-General Antonio Guterres for the heads of state/ government participating in the UNGA session.

During the reception, the prime minister interacted with New Zealand Prime Minister Jacinda Ardern. Earlier, the prime minister arrived in New York Monday night to lead Pakistan’s delegation to the 77th session of the United Nations General Assembly, in which some 140 world leaders are participating.

The prime minister is set to address the 193-member assembly during its high-level debate on September 23. The debate opens Tuesday and ends on September 26.