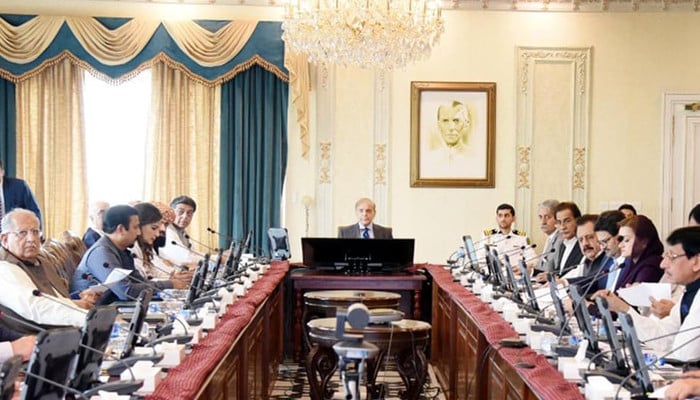 ISLAMABAD: Prime Minister Shehbaz Sharif is chairing a meeting of the federal cabinet over the appointment of the army’s two top officers — the army chief and the chairman joint chiefs of staff committee.

The meeting comes a day after the prime minister summoned a meeting of the coalition partners, wherein, they backed PM Shehbaz, showed full confidence, and authorised him to make the appointments.

“We stand with you whatever decision you take,” said a statement from the Prime Minister’s Office quoting the views of leaders of coalition parties.

Following the meeting, Defence Minister Asif said that the summary of the chief of army staff’s appointment would be sent to President Dr Arif Alvi today (Thursday) and it “includes PPP Co-chairman Asif Ali Zardari’s suggestion as well.”

Speaking during Geo News programme “Aapas Ki Baat”, the minister said that the former president gave a good suggestion which has been included in the updated summary as the top priority.

The Prime Minister’s Office confirmed Wednesday morning that it has received a summary from the Ministry of Defence with a panel of names for the appointment of the new COAS and CJCSC.

“The Prime Minister will take a decision on the appointments as per the laid down procedure,” the brief tweet from PM Office read.

Although the names of the front runners for the offices have not been made public yet, sources told Geo News that Lt Gen Asim Munir, Lt Gen Sahir Shamshad Mirza, Lt Gen Azhar Abbas, Lt Gen Nauman Mahmood, Lt Gen Faiz Hamid and Lt Gen Mohammad Aamer’s names are on the list.