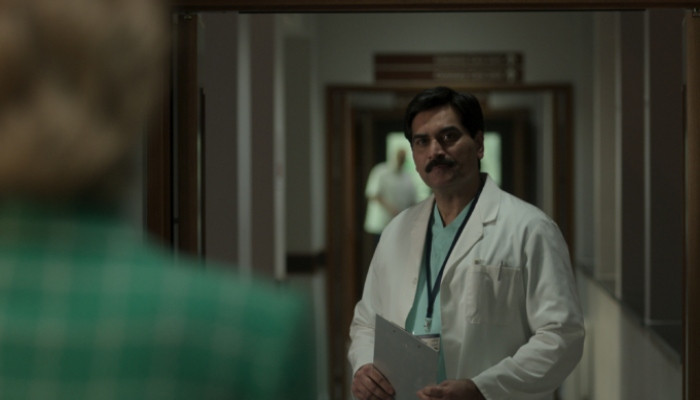 Humayun Saeed is bringing back one of history’s most controversial romances on screens in the upcoming fifth season of Netflix’s acclaimed drama series The Crown.

The Pakistani superstar is set to play the role of Dr. Hasnat Khan, who made headlines for his romantic linkups with the Princess of Wales, Lady Diana.

Speaking of his first-time experience of playing a real-life character in the award-winning series, Saeed exclusively told Geo News that it was a ‘challenge’ for him.

“Everyone knows of Dr. Hasnat Khan in connection with Princess Diana so yes you do have that added pressure,” the Meray Paas Tum Ho star shared.

Saeed, 51, who has been ruling over screens for more than two decades in Pakistan as an actor as well as a successful producer, further shared, “As an actor it was also a challenge for me to portray this role as I have never portrayed a real-life character on screen before.”

The upcoming season of The Crown, set to release on November 9, chronicles the tumultuous events of the Royal Family during the mid-1990s.

While the then-Prince Charles and Princess Diana’s separation and divorce takes the center stage in the forthcoming installment, fans are eager to see Dr. Hasnat and Diana’s brief yet solid romance depicted in the show.

For the unversed, Dr. Hasnat was a heart surgeon at London’s Royal Brompton Hospital, where he first met Princess Diana in 1995.

Speaking of his international debut in the record-breaking hit series, Saeed detailed the process of getting the role of Dr. Hasnat and how he transformed into Diana’s one-time lover.

The Jawani Phir Nahi Aani star revealed, “Things work differently internationally. All the biggest stars still give auditions and that too multiple times before a decision is made. And it was no different for me.”

Saeed, who has already proven his mettle on his home ground, shared that he auditioned for the role in a very long time.

The Main Hoon Shahid Afridi star shared his work experience alongside the cast, especially Elizabeth, who will be playing the role of Diana in the upcoming season.

“It was great working with Elizabeth. We had already interacted during our chemistry reading online before we met again on set in the UK.”

Recalling his first rehearsal, Saeed revealed, “I was a bit nervous about being on a new project and working with a new team and she [Elizabeth] sensed that and told me that she feels the same at the start of a new project. That really helped!”

Praising Elizabeth for her exceptional acting skills, Saeed further said, “We spoke about Pakistan and she was keen to know more about our people, culture and entertainment industry,” adding that, “One thing I must say is that her dedication towards her work is on a next level. The effort she puts into her work is inspiring.”

Saeed’s first glimpse as Dr. Hasnat was released weeks before the scheduled release date of the show and his transformation left fans and viewers of the show impressed.

He also shared that while researching on Dr. Hasnat’s role, he realized that he was a simple and very private person.

“I am sure people will see and appreciate this,” the Bin Roye actor noted.

The Punjab Nahi Jaungi star also reflected on marking his first global footprint with the international series. “Hamid Hussain, who is now my talent agent, took the first step and helped me to get this role.” he said.

Sharing his experience of working in The Crown, Saeed praised the show’s creator Peter Morgan and said, “I feel Peter has done an amazing job in handling every character’s portrayal sensitively.”

The Crown season five has already sparked criticism from royal family experts over the explosive plotline. Saeed was asked about his expected response from the viewers and royal fans of his portrayal as Dr. Hasnat.

He replied, “The characters are [royal] family members and public figures – and people naturally have strong feelings about them, and memories of the events that we are depicting.”

“I am sure people will see and appreciate this,” the Bin Roye actor noted.

The Crown season five will be streaming out on Netflix on Nov. 9. The new cast of the series includes, Imelda Staunton will be portraying Queen Elizabeth, Jonathan Pryce as Prince Philip, Dominic West as Prince Charles and Olivia Williams as Camilla Parker Bowles.