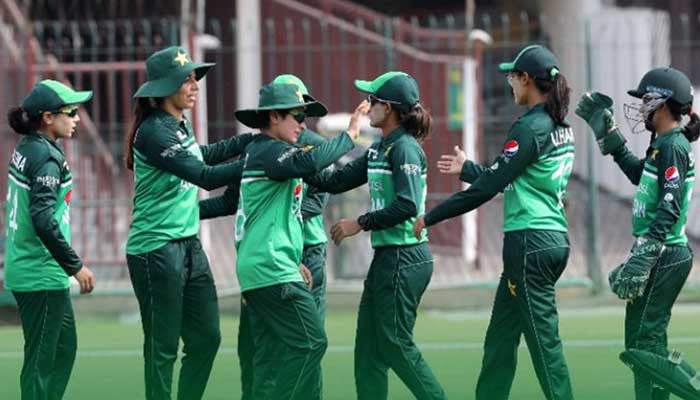 In this one-sided clash, Pakistan has managed to clinch the three-match series which will now take the Girls in Green to the second spot in the ICC Women’s Championship 2022-25 surpassing South Africa in the race.

Ireland opted to bat first in the match and were bowled out for 194 runs. Meanwhile, Pakistan’s batter chased the target in 32.4 overs with Sidra and Bismah’s batting class on display.

Openers Muneeba Ali and Sidra set the foundation strong with 59 runs in the 195-run victory chase. Muneeba scored 27 for 33 balls after hitting two fours for the team. In the 12th over, she was bowled out by Irish all-rounder Eimear Richardson.

Sidra was joined at the crease by captain Bismah, and neither batter ever gave Ireland’s bowlers a chance to settle in as they hit boundaries at will. Sidra, who struck a perfect 176 in the previous game, returned unbeaten on 91 from 93 balls, including 12 fours. In 70 balls, Bismah scored 69 runs, including 10 fours.

For the second wicket, Bismah and Sidra put up an unbroken 136-run partnership, bringing the team home in the 33rd over.

Earlier, Pakistan’s bowling line-up led by Ghulam Fatima and Nashra Sandhu toppled the visitor’s batting order, bowling them out for 194 runs in 47.2 overs.

Leah Paul was dismissed for no score by pacer Fatima Sana on the second ball of the game. Aliya Riaz’s excellent fielding allowed Gaby Lewis to be the next to depart for the pavilion after the visitors were reduced to 27 for 2 in 6.1 overs by a direct hit.

The 59-run eighth-wicket stand between Mary Waldron and Arlene Kelly, which allowed the tourists to score 194 despite losing wickets often, was a major factor. At number seven in the batting order, wicketkeeper-batter Waldron top-scored with 35 from 57 balls and two fours. Kelly, who was batting at position nine, hit three fours in his 45-ball 34.

For Pakistan, the spin twin of Fatima and Nashra bagged three wickets apiece for 32 and 41 runs, respectively. Fatima took two wickets for 26 in 8.2 overs.