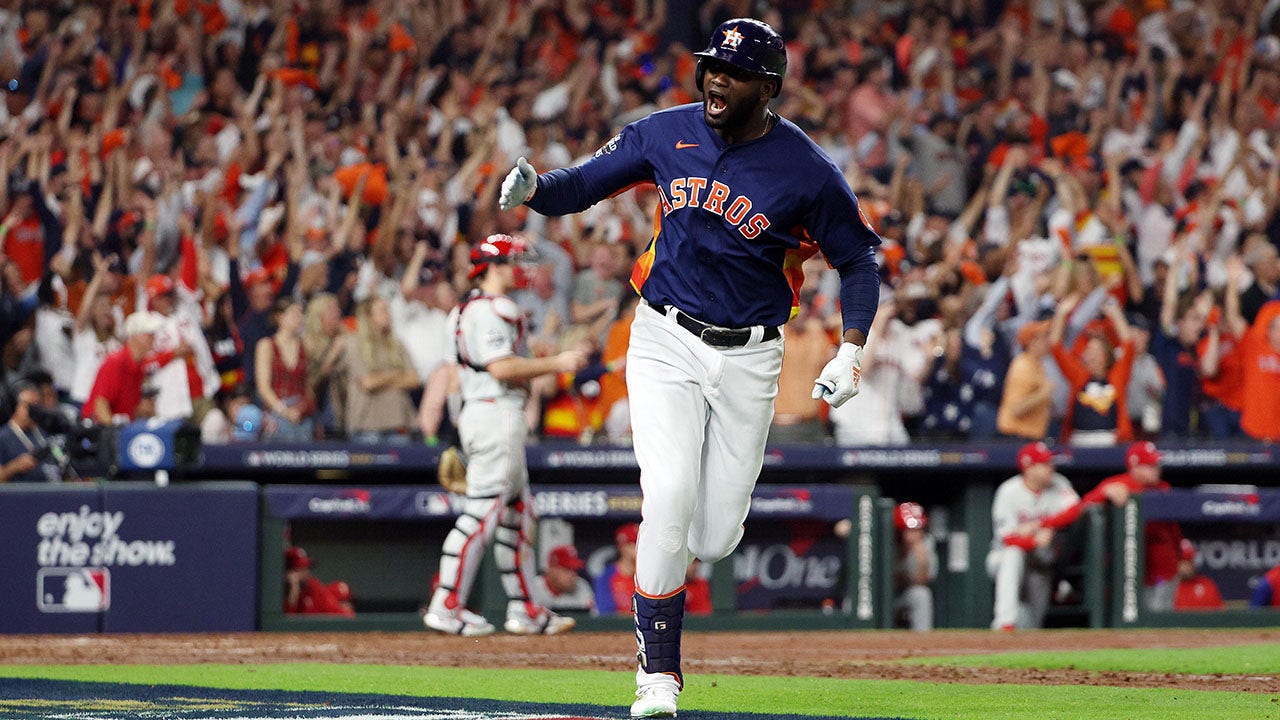 The Houston Astros are World Series champions once again.

The Astros took home Game 6 by a score of 4-1 to beat the Philadelphia Phillies in six games.

Houston won the final three games of the series after being down two games to one – they became the first team to win the World Series in their home ballpark since the Boston Red Sox in 2013.

Yordan Alvarez #44 of the Houston Astros hits a three-run home run against the Philadelphia Phillies during the sixth inning in Game Six of the 2022 World Series at Minute Maid Park on November 05, 2022 in Houston, Texas.
(Harry How/Getty Images=)

Game 6 was the pitcher’s duel it was expected to be as Framber Valdez and Zack Wheeler traded zeroes for five-straight innings, combining for 13 strikeouts in that span. But in the sixth inning Kyle Schwarber had enough. He laced a solo homer to lead off the inning – it was his sixth home run in his last 11 games and his third in his last four. It also was Valdez’s first homer allowed at Minute Maid Park since July 3.

However, Wheeler ran right into trouble, putting runners on the corners with one out. Rob Thomson yanked him so lefty Jose Alvarado can face Yordan Alvarez.

It didn’t matter – Alvarez tanked a three-run home run over the batters eye in center field 450 feet away to give the Astros a 3-1 lead. Surely, Thomson might be kicking himself for a long while. Christian Vazquez added an RBI single a few batters later.

That gave Valdez the win. He allowed just that one run on two hits and two walks while striking out nine in his six innings of work. It was his third-consecutive game with nine strikeouts, and he pitched to a 1.44 ERA this postseason.

Yordan Alvarez #44 of the Houston Astros celebrates after hitting a three-run home run against the Philadelphia Phillies during the sixth inning in Game Six of the 2022 World Series at Minute Maid Park on November 05, 2022 in Houston, Texas.
(Harry How/Getty Images)

Hector Neris, Bryan Abreu, and Ryan Pressly combined for three scoreless innings to clinch the title. The Houston bullpen finished the postseason with a 0.83 ERA, the lowest by any team in a single postseason since the 1990 Cincinnati Reds had a 0.29 ERA.

Dusty Baker finally has a World Series title as a manager. He first became a manager in 1993, and has three Manager of the Year Awards to his name, but he was missing that coveted ring. In his third appearance in the Fall Classic (his first was back in 2002), he finally got one.

Manager Dusty Baker #12 of the Houston Astros looks on during the national anthem prior to Game 6 of the 2022 World Series between the Philadelphia Phillies and the Houston Astros at Minute Maid Park on Saturday, November 5, 2022 in Houston, Texas.
(Daniel Shirey/MLB Photos via Getty Images)

Bryce Harper’s dominant performance may be all but forgotten about in the losing effort – he hit .349 this postseason with 13 extra-base hits, one shy of tying the all-time record that Randy Arozarena (2020) and David Freese (2011) share.

Yordan Alvarez #44 of the Houston Astros celebrates his three-run home run against the Philadelphia Phillies with teammate Jeremy Pena #3 of the Houston Astros during the sixth inning in Game Six of the 2022 World Series at Minute Maid Park on November 05, 2022 in Houston, Texas.
(Carmen Mandato/Getty Images)

The Astros became hated in recent years due to their 2017 World Series title arguably being tainted by their sign-stealing scheme. There are rumors that Jose Altuve also wore a wire during his ALCS-clinching walk-off home run in 2019, although that has never been proven.

This was the Astros’ fourth World Series appearance since 2017 – they had lost their previous two trips to the Washington Nationals in 2019 and the Atlanta Braves last year. Was it karma? Was it just simply being unable to get over the hump without cheating? Who knows.

But at this point, say what you want about the organization – anyone’s hatred should now be simply out of jealousy.

The fact of the matter is they know what it takes to get it done. They produce talent like it is nobody’s business, and they are going to be a nightmare for everyone until, well, we all just have to wait.